A BOLD OPERATION TO SAVE THE LAST ROTHSCHILD’S GIRAFFE 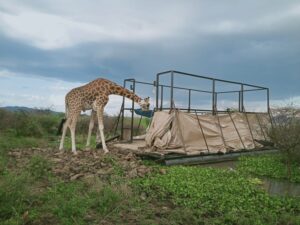 Have you ever seen a floating giraffe? Few people had … but that didn’t stop us when the need arose.

In 2020, we launched an ambitious (and amphibious) plan with our partners to return Rothschild’s giraffe to the iconic Eastern Rift Valley, their ancestral home where they were wiped out 70 years ago.

On a brilliant sunlit day in December 2020, we successfully began the rescue of trapped giraffe from an island in Lake Baringo that is being flooded by rising water levels. We are sailing them to a special sanctuary on the mainland on a barge made by local community members.

First, we rescued the two most imperiled giraffe from the island, Asiwa and Pasaka, gently floating them than a mile to safety in their new home at the Ruko Community Wildlife Conservancy. Then in January 2021, we moved the lone bull, Lbarnoti. The big male walked calmly onto the barge, and never stopped eating acacia seed pods on the whole trip!

Our plan was to try to train the remaining six island giraffe – including new calf Noelle, born in December – to also enter the barge voluntarily, so we could move them in early 2021. SGN and partners were able to successfully move 3 of the 9 giraffe using food to lure them onto the barge.

Rothschild’s (Nubian) giraffe numbers have plummeted by 80%, leaving only 3,000 in the wild today. But there is hope, sparked by innovative conservation teamwork such as this.

“We feel a great sense of urgency to complete this rescue,” said our president, David O’Connor. “With giraffe undergoing a silent extinction, every one we can protect matters.”

We also will reintroduce a further 12-15 Rothschild’s giraffe from Soysambu Reserve and Ruma National Park in Kenya.

Working with the communities in the area over the next several years, we will keep this combined group of giraffe safe, and as they breed and their numbers grow, they will repopulate the Eastern Rift over time, eventually rejoining their cousins in Uganda!

We need your help to complete this incredible and hopeful project, that not only rescues stranded giraffe, but is part of a long-term plan to reintroduce these giraffe to their ancestral lands. Local communities and the Kenyan government have come together around this incredible effort, a positive conservation story and impressive effort for Africa’s last giants. 100% of your donation goes to on-the-ground conservation work in Africa.

Once widespread across the Rift Valley in Eastern Africa, Rothschild’s (Nubian)  giraffe populations have declined by well over 80% so only 3000 are left in the wild today. In Kenya, only 800 Rothschild’s giraffe remain in small isolated populations.

In 2011, after a 70 year absence, eight Rothschild’s giraffe were re-introduced onto a peninsula in Lake Baringo as a first step to repopulate their original rangelands in western Kenya. However, unpredicted increasing lake water levels have turned the peninsula into an island, making the relocation of the giraffe off the island urgent.

To bring the giraffe to the mainland, SGN partnered with Northern Rangelands Trust and the people of Ruko Conservancy to complete a 4,500- acre fenced sanctuary in the 44,000 acre Ruko Community Wildlife Conservancy. This giraffe sanctuary will keep the re-introduced, somewhat naive, giraffe safe from predators and poachers.

Very importantly, this program benefits local people through the creation of crucial jobs building the sanctuary and fences, as well as for ongoing sanctuary operations and anti-poaching rangers. This is hugely important as people are benefitting directly from giraffe conservation, helping promote sustainable co-existence into the future.

In preparation for the move, the Ruko team built a specially designed barge to safely bring the giraffe to the mainland sanctuary. After much preparation and planning, in December 2020 we successfully moved the first two giraffe from the island to the mainland! The team then attempted training the remaining island giraffe to voluntarily walk onto the barge using a few of their favorite treats, mangoes and acacia seed pods! We are so proud to say that all 9 island giraffe were successfully rescued, 3 of which we were able to train using food. See the photos, and read more about this incredible effort in our News Section.

These giraffe will be the pioneers in re-populating the region. Once the group is healthy in the sanctuary, they will be released into the wider Ruko ecosystem which is perfect giraffe habitat. Then other giraffe will be translocated there to increase group size and improve the gene pool. Overtime these giraffe should  be able to travel  through wildlife corridors to their distant cousins in Uganda!

We need your help to complete this incredible and hopeful project, that not only rescues stranded giraffe, but is part of a long-term plan to reintroduce these giraffe to their ancestral lands. Local communities and the Kenyan government have come together around this incredible effort, a positive conservation story and impressive effort for Africa’s last giants. 100% of your donation goes to on-the-ground conservation work in Africa. 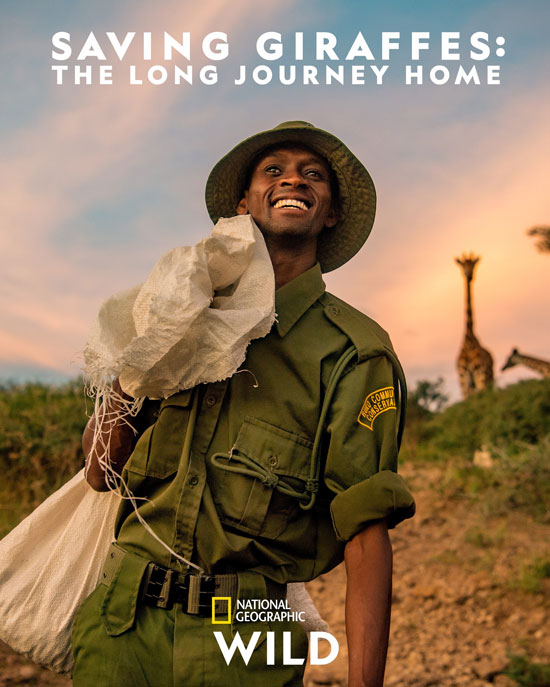