From Parisian Royalty to Kardashians Keeping Up 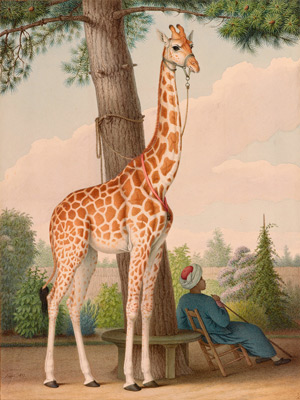 France’s first celebrity giraffe was Zarafa, a gift from the Ottoman viceroy of Egypt Muhammad Ali to Charles X, King of France in the 1820s. The infant Zarafa, a Nubian giraffe, was first carried on the back of a camel and then transported on a specially constructed barge down the Nile River, before being loaded onto a ship sailing to Marseilles. On arrival to France in 1826, Zarafa made quite the impression and continued to turn heads on the 500-mile journey to Paris. She was walked by Sudanese caretakers in a small procession with some cows and continually gathered spectators, who were entranced by the exotic creature with a patterned patchwork, a long neck and equally long slender legs.
Zarafa arrived in Paris in 1827. The king reportedly hand-fed rose petals to Zarafa, and about 600,000 people came to see her in the first six months. A French trendsetter, Zarafa popularized the color “giraffe yellow” and influenced women’s hairstyles (in the shape of horns), fabric designs, wallpaper decor, and works of art. After her death in 1845, she was taxidermied and is still on view at the Muséum d’Histoire Naturelle de La Rochelle in France.

A five-day-old calf was rescued by game wardens at the Loisaba Community Conservation lodge in Kenya after his mother was attacked and killed by lions. In four months, Lawrence grew to be 8 feet tall and was described as a giant puppy dog, running off with feeding nipples and other items and tucking his head into doorways and windows.
He was viewed as a nuisance by some and had to be walked 16 miles to a small, fenced rhino preserve where he was going to live. For the journey, Lawrence didn’t need a leash—he responded to “Come on, Lawrence.” Two years later, visitors from the Loisaba Community Conservation came to see the rhinos. Lawrence immediately recognized them and quickly approached their vehicle, stuck his head inside and got some loving scratches from his human friends he’d known at his previous home. Unfortunately, Lawrence’s life ended prematurely in 2012 when he was killed by rhino poachers. 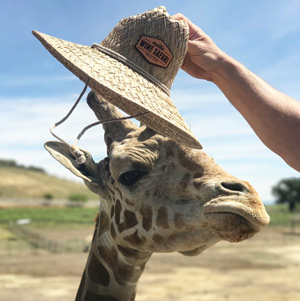 Stanley the giraffe was among 140 animals living at the Malibu Wine Safari exotic animal park when a massive wildfire broke out in 2018. A social media post of Stanley went viral, with people voicing concern for the well-being of Stanley, along with the other creatures.
In a case of celebrities helping celebrities, Khloé Kardashian took to social media to reassure Stanley’s followers that he and the other animals were safe under the care of 32 park staffers who had stayed behind despite evacuation orders. Stanley has remained in the spotlight, and is frequently referred to on social media. #stanleythegiraffe has been tagged in 15,600 posts on Instagram.

Just One of the Gang: Gemina

Visitors to the Santa Barbara Zoo in California developed a special love for Gemina, a 12-foot tall Rothschild’s giraffe with a neck deformity that began to develop when she was 3. A distinct 90-degree bend formed in her neck due to the C3 and C4 vertebrae fusing together. But veterinarians determined she was in no pain, and Gemina lived a relatively uneventful life (in terms of medical needs) at the zoo.
She appeared on the reality TV show “The Bachelor” during a sunset dinner at the giraffe exhibit, where the couple had the chance to meet her. One year later, on the show “Miracle Workers,” she was named as the source of inspiration for a boy with scoliosis and other children with physical impairments and congenital disabilities. Gemina lived to be 21, and her vertebrae, skull and jawbone have been preserved and are on view at the zoo. 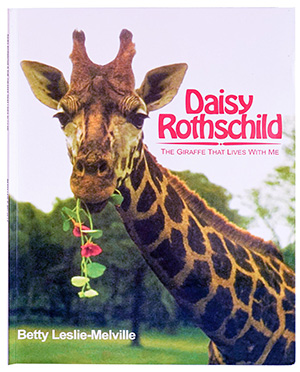 Daisy and Marlon: All in the Family

When Betty Leslie-Melville and her husband Jock were asked to adopt an endangered Rothschild giraffe (one of 130 remaining at the time), they readily agreed. Although the Melvilles’ journey into “parenthood” would not be easy, the couple would come to discover first-hand the pyschological sensitivity of giraffes — how they need to get and give love. As documented in Betty’s book “Daisy Rothschild, The Giraffe That Lives With Me,” the couple met and married in Kenya and settled in Nairobi, where they bought an old home with a large yard full of trees and flowers, and where they aimed to raise their giraffe.

To save the Rothschild calf from poachers, Betty and Jock adopted the girl they named Daisy. The effort to relocate Daisy was difficult and emotional. Betty describes Daisy as distraught and unhappy. Betty had even seen what she called a tear in Daisy’s eye in the first two days when she wasn’t eating or drinking. After 49 hours of Betty and Jock visiting with and talking lovingly to Daisy, the giraffe finally opened up. She drank from a pan of milk Jock was holding and kissed him, showing that she had finally felt loved enough to imprint (or bond) with another creature. To Daisy, Jock became her “mother.”

The couple would go on to adopt another giraffe, a boy named Marlon, who was immediately sweet and affectionate and tried to form a relationship with Daisy, although Daisy was jealous and wanted nothing to do with Marlon. Daisy would come to eventually like Marlon, but only after being reassured by Betty and Jock that she was still loved.

The couple’s experience would lead to the couple establishing the African Fund for Endangered Wildlife to raise money for giraffes and other animals, as well as opening the first educational nature center in independent Africa, providing opportunities for African schoolchildren to meet Daisy and Marlon and learn more about the very animals that make their homeland special.