West African giraffe are a unique type of giraffe, currently found only in Niger, nowhere else. They are also the most endangered of all the giraffe. Twenty-five years ago there were only 49 of these giraffe left, but thanks to the incredible efforts of the Niger government and people, today there are 600! But that is still too few, and they are all in one population in the Koure region, where they are increasingly losing habitat and facing conflict. Giving hope to these giraffe in 2018, West African giraffe were reintroduced to Gadabedji Reserve, 500 miles from Koure. This successfully created a second population of these beautiful giraffe, helping ensure that this type of giraffe will not be lost to the world forever.

What first drew us to this project is the fact that Niger is one of the five poorest countries in the world, and their Government and people are sharing their extremely limited resources to help preserve these giraffe for posterity.

We hope you’ll join us and help support the continued return of giraffe to Gadabedji with future giraffe reintroductions to create a larger, sustainable population, and to help us support the local teams and people who protect these giraffe everyday! Help the giraffe and the people living alongside these incredible, gentle survivors, and ensure their survival in Niger.

Your donation will help reintroduce more giraffe here and monitor their safety. 100% of your donation goes to on-the-ground conservation work in Africa.

The beautiful West African giraffe is a unique subspecies of the Northern giraffe that today is only found in Niger. They are the most endangered type of giraffe in the world, but thanks to the work of the Niger government and the local communities there is hope for these last giants of the Sahel, a semi-arid habitat just below the Sahara.

In the mid-1990s there were only 49 West African giraffe left in the wild, they were on the verge of extinction. However, the Niger government and the people who co-exist with these giraffe took bold conservation action to protect and monitor these giraffe. These incredible efforts have resulted in an amazing recovery of the West African giraffe population to over 600 individuals today! This success is made all the more remarkable considering Niger is among the top five poorest countries in the world.

Despite once being widespread throughout West Africa from Senegal across to Nigeria, this last population of 600 are restricted to the “Giraffe Zone” in Niger. Here they share their habitat with local communities, overlapping for space and resources.

The “Giraffe Zone” is part of the W Transboundary Biosphere Reserve and covers an area of 660 square miles (1,700 square kilometers), but it is not formally protected. This last remaining population of giraffe is isolated, and they are still in danger of being wiped out by disease, drought, habitat loss and increasing pressure from human conflict and insecurity in the region.

Today, with increased numbers of giraffe and people in the Giraffe Zone, the giraffe have begun to venture out of the Zone into areas where people are not used to giraffe, which is increasing human-giraffe conflict, and is bringing them too close to terrorist insecurity near the borders with Mali.

Since 2018, Save Giraffes Now has been supporting the local teams in Niger in their vital work to monitor and protect this last West African Giraffe population. SGN has also collaborated and supported the Giraffe Conservation Foundation, the Niger government and other local partners in their work to not only protect the giraffe in the Giraffe Zone, but in a bold conservation initiative to create a second West African Giraffe population in Niger.

West African giraffe once existed in Gadabedji Biosphere Reserve in Niger, which is about 500 miles from the Giraffe Zone, but they were wiped out there in the 1970s by illegal poaching and drought. However, thanks to the efforts of the Niger Government and partners, Gadabedji is once again safe for wildlife, and is perfect giraffe habitat.

In late 2018, SGN’s President David O’Connor assisted in the first re-introduction of West African Giraffe into Gadabedji, moving eight giraffe from the Giraffe Zone and releasing them into Gadabedji. These first giraffe have been continually monitored in their new home, and they are thriving! This immense effort led by Giraffe Conservation foundation and supported by SGN and others is a huge conservation success for the West African Giraffe. By creating this second population, we’ve created an insurance group, so that all the eggs literally aren’t in one basket with just the giraffe population in the Giraffe Zone!

We hope you’ll join us and help support the continued return of giraffe to Gadabedji with future giraffe reintroductions to create a larger, sustainable population, and to help us support the local teams and people who protect these giraffe everyday! Help the giraffe and the people living alongside these incredible, gentle survivors, and ensure their survival in Niger.

Your donation will help reintroduce more giraffe and monitor their safety. 100% of your donation goes to on-the-ground conservation work in Africa. 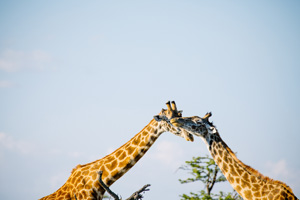 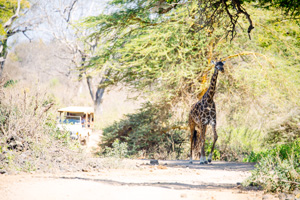 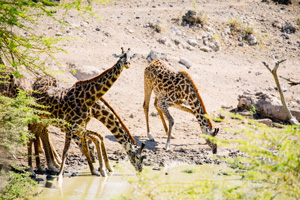