An iconic species, giraffes are sensitive, gentle, social, and friendly. We want you to get to know and love these magnificent beings, just like we do. 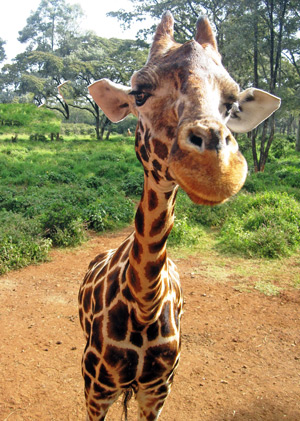 No Bones About It

Giraffes’ necks are just like ours…almost. A giraffe’s neck has seven vertebrae, the same number as a human. However, a typical human neck is a mere 4.3 inches in length, while a giraffe’s is 6 feet long with vertebrae that can measure more than 10 inches each.

Just like us…giraffes like to eat. They spend much of the day eating, consuming up to 75 pounds daily. Giraffes are herbivorous browsers, consuming bushy and woody plants. But just like the gourmets among us, giraffes eat flowers, too!

Just like us…giraffes have a sweet tooth. A favorite treat is mangoes!

Just like us…giraffes have insomnia. Okay, it’s not really insomnia, but they are only in deep sleep on the ground with their necks curled back resting their heads on their rumps for 2-6% of the night! 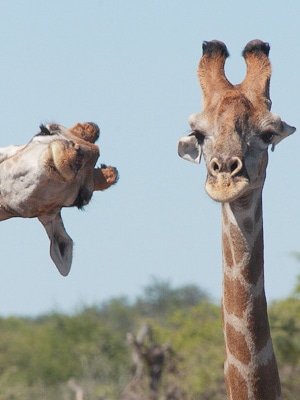 Mugging for the Camera

Just like us…giraffes have been caught photobombing their friends! “Crashing into the Picture” shows a couple of giraffes in Etosha National Park, Namibia. This photo was a finalist in the Brigitte Alcalay-Marcon/Comedy Wildlife Photo Awards 2020.

Just like us…giraffes have fingerprints. The large dark patches or spots of the giraffe’s hide are like human fingerprints.  No two are alike!  In addition to serving as camouflage, the patterns are believed to also regulate the giraffe’s internal temperature; beneath each patch is a network of blood vessels and sweat glands to dissipate heat. The patches also are used to identify individual giraffes in population studies.

Just like some of us…giraffes have worked for NASA. Their elastic-walled blood vessels dilate and constrict to manage blood flow. The skin around the legs is very tight and acts as compression socks helping to efficiently circulate their blood. NASA has done research on the blood vessels in giraffe legs to get inspiration for human space suits.

Just like us…giraffes have daycares. While some mothers go off to feed, one female will stay with the calves, forming what is described as a “crèche,” the French word for nursery. 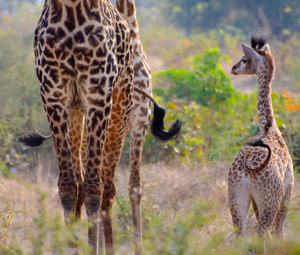 Just like teenage girls…as female giraffes grow into adulthood, they associate with an increasing number of females to expand their social network.

Just like us…giraffes partake in their own test of strength to show dominance. Just like humans do in arm wrestling, male giraffes engage in battles called necking, using their heads as weapons to see who is stronger.

Just like us…they get stressed. In humans, high blood pressure is a signal that stress levels are too high. In giraffes, the effects can be seen in their mouths: If tooth enamel is damaged, it indicates that there has been a stressful period in a giraffe’s life.

Just like us…more baby girls than boys are born after apocalyptic events and catastrophes. Human moms tend to give birth to more daughters after stressful global events, which may be due to the higher presence of stress hormones. (Research has shown this occurred in human births after 9/11.)

Just like us…giraffes mourn. Mothers even become distraught at the loss of their baby and may return for days to the spot where the calf died. Additionally, other giraffes, females in particular, will gather around the body of a dead calf, sometimes running frantically around it, sometimes nudging it with their muzzles, and sometimes simply standing over it. 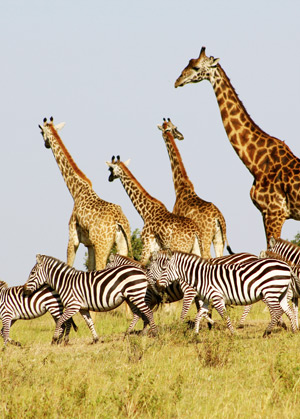 Just like us…giraffes emigrate. While they traditionally move throughout a region to forage for food, sometimes they go further afield in search of “greener pastures.” At Arusha National Park in Kenya, one group of giraffes served as a scout party, traveling up to 4 miles during the night, then returning back to the park, which led researchers to believe they were looking for new territories.

Just like us (at least when riding a motorcycle)…a giraffe at full gallop offsets its weight when making a turn. It uses his neck as a counterbalance and shifts it in the opposite direction of the turn.

Friends of All Types

Just like us…giraffes have cross-species friendships. Just as humans love our dogs and cats, giraffes forge relationships with other animals. For example, giraffe and antelope at the Oakland Zoo spent time together feeding, sparring, licking and smelling each other’s faces and necks, and resting on the same straw bed, more so than they did with their own species. In the wild, giraffes’ tall vantage points make them great sentinels for other herds of animals. Giraffes often hang out with zebras, antelope, and wildebeests, which also offer extra protection for giraffes