The Science of Living Large 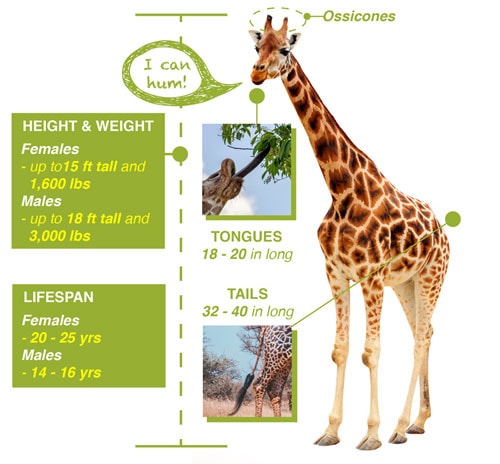 Giraffes are the tallest living mammals in the world.

The giraffe’s tongue is typically black, blue or purple and can measure 18–20 inches long.

The tongue is also prehensile, meaning the animal can use its strong, muscular tongue to grasp and manipulate objects. Thus, giraffes can use their tongues to adeptly remove leaves and shoots from even the thorniest of plants.

Giraffes have the longest tails of any mammal, ranging from 32-40 inches long.

Giraffes have ossicones (often mistakenly called horns) made up of cartilage and covered in skin or fur.

Although the ossicones are soft and lay flat on the calf’s head at birth, they soon harden and stand upright.

A giraffe heart can measure up to 2 feet long, weighs about 21.5 pounds and beats approximately 150 times per minute. Their blood pressure is twice that of a human. 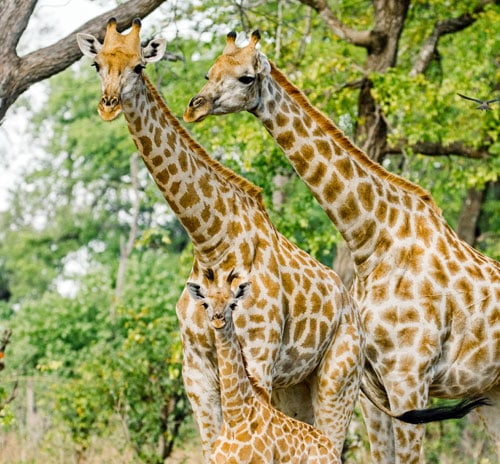 When ready to mate, the male giraffe will taste the urine of the female giraffe to detect whether certain hormones are present which indicate that the female is “ready” to mate.

The gestation period for a pregnant giraffe is approximately 15 months.

Cows give birth standing up. When a calf is born, it experiences the longest drop—about 6 feet—to the ground of any animal. A newborn calf can stand up and keep up with the group within one hour.

Males are sexually active for about six years, while a female can reproduce from a young age through the end of her life.

Giraffes are often described as “silent” giants, but they have been observed bleating, grunting, snorting and humming. Yes, humming! They produce an infrasound frequency with a rich harmonic structure that cannot be detected by the human ear.

Giraffes live in a complex social system, called “fission/fusion,” where social groups change in size and composition. Animals will form temporary sub-groups (fusion) for certain activities, such as sleeping. Then at other times they will split into different sub-groups (fission) for a different activity, such as foraging.