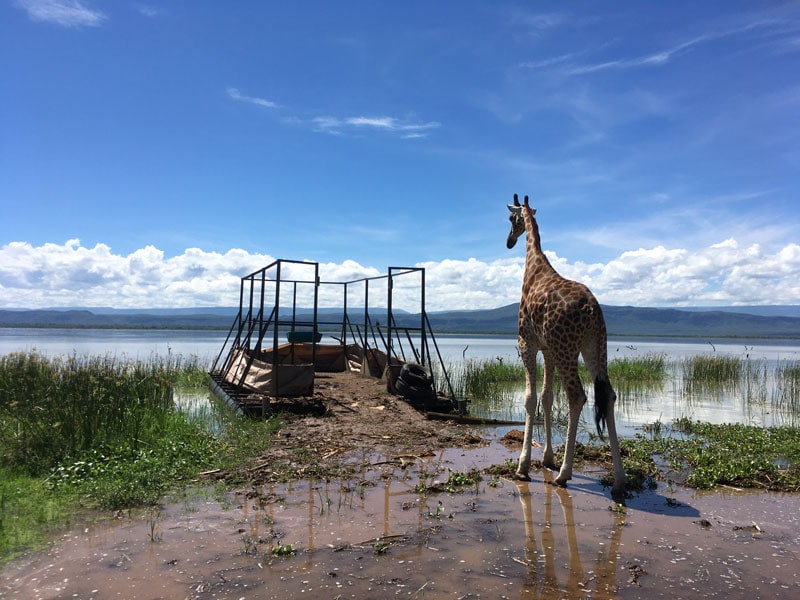 Have you ever seen a floating giraffe? You must be mad… or are you?! 😉

Nearly a decade ago, Longicharo Peninsular in Lake Baringo became home to 8 Rothschild’s giraffe (also known as Nubian giraffe) – it was the first time in 70 years that Rothschild’s giraffe were seen in the area. Rothschild’s giraffe populations were once widespread across the Rift Valley of Kenya but due to poaching and conflict for resources with an ever increasing human population, they are now only found in small isolated pockets of protected areas. The first giraffe were initially trucked to Baringo from Soysambu ranch, they were then put onto a barge and floated across the lake to the peninsular.

However, over the past few years the rains in Kenya have been exceptional and as a result the water level of Lake Baringo has risen dramatically turning the Longicharo peninsular into an isolated island – and in doing so the giraffe are now trapped there. So 9 years later, 2020, the giraffe are being prepared to travel in style once again…!

Longicharo island is a rugged lava pinnacle which hosts a mix of vegetation types but predominantly Acacia mellifera trees; a favourite meal for giraffe (along with mangoes of course !). There are currently 8 giraffe found on the island; Lbarnnoti the only male and an adult, five adult females known as Nkarikoni, Nalangu, Awala, Asiwa and Nasieku, and two juvenile females; Susan and Pasaka (also known as Easter).

A team of four rangers; Charles, Nicolas, Michael and another Charles monitor the giraffe in the morning, at midday and in the evening. The rangers are also responsible for feeding the giraffe lucerne pellets twice a day in a trough which is hanging on the custom-made floating barge… The floating barge is a unique engineering masterpiece – designed specifically to carry the weight and height of a handful of giraffe. By feeding the giraffe on the barge, the hope is that they will get so used to it that when the curtain is closed and they are contained inside for their move across the lake, their stress levels will be as low as possible.

As usual though, nothing is plain sailing and there is a significant twist! Due to the rapidly rising water (sometimes 6 inches per day!), Asiwa (meaning beautiful in Pokot) has been trapped on a lower part of the island and is now isolated from the remaining giraffe. She is accompanied by two rather territorial and aggressive ostriches who will also need to be moved in due course, along with a handful of impala and warthog. This lone giraffe is now a priority; the team on the ground are working hard to set plans in place to move her before the water completely engulfs her piece of the island.

The great news is that most of the giraffe are slowly getting used to the barge – taking us one step closer to the big move. Once on the mainland, there is a safe and secure fenced sanctuary in its final stages of construction which will become the giraffes new home. This sanctuary is situated within the Ruko Community Conservancy and it is our hope that these giraffe will be the start of a “seed” population which brings free-ranging Rothschild’s giraffe back to western Kenya, their ancestral home.

As the biggest supporters of this project, Save Giraffes Now are working hand in hand with the Ruko Community Conservancy, Northern Rangelands Trust and the Kenya Wildlife Service to execute the relocation of the giraffe to the mainland. In time, further giraffe will be relocated to the Ruko sanctuary from other areas within Kenya – boosting the numbers and their potential to re-populate the surrounding landscape.